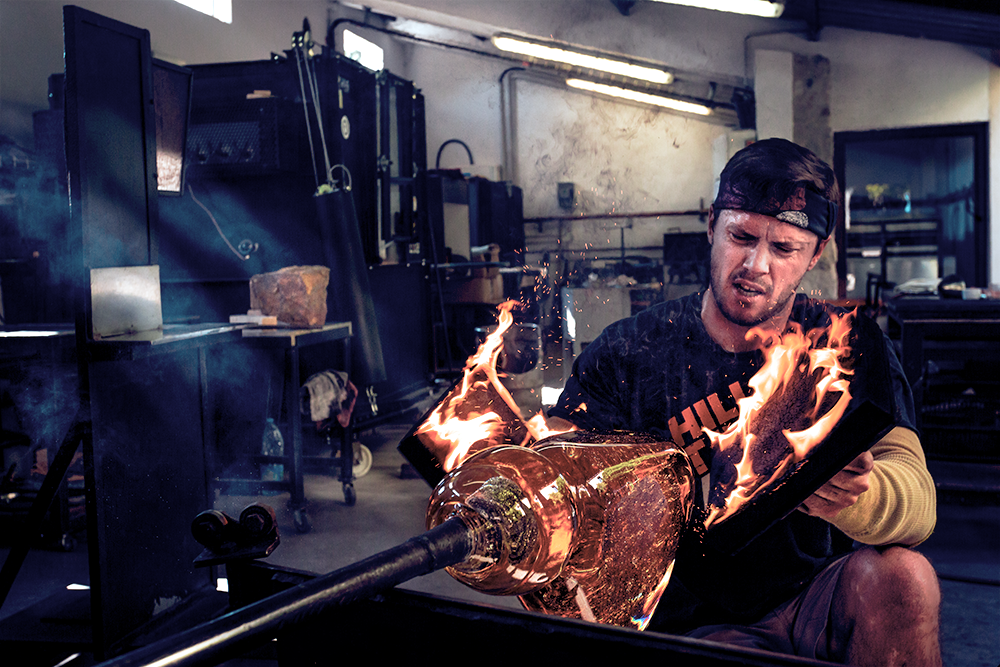 As far I’m aware the experience I had at Pierini studio was my first consciously contact with an artisan and handcraft with the sole propose of telling a visual story of a craft. I always have been fascinated by the glass in many ways, the shine, the transparency, and how it is made. It was a happy month for me at Cote d’Azur, I had won a photography contest and my prize was a month doing a french course in Nice. Between the classes, I spent my time exploring the region. Eventually, I learned that Biot was a small village famous for its artisanal glass. So, one day I decided to go there and try to see a glassmaker doing his art, but, as I later discovered, it wasn’t that easy. You have to know beforehand where are you going or spend a good time searching for it as I did. I saw some glassmakers, some shops, a charming village but not really what I wanted. The truth is for some glassmakers there it is a business itself to show his work, they charge photographer for it. Not only I was in a budget but I didn’t want a show, I wanted to see real craftsmanship acting.

When I was coming back to Nice, just in front of the Biot’s village I found Pierini glassmaker and his studio in a charming building that used to be an old olive oil mild. I asked to do some photos and Antoine permitted, but I was unlucky, the work for the day was almost done. However, Antoine kindly invited me to come the next day when he was about to do a big art glass piece with his father’s assistance. So, the next day I was there fully equipped with my camera and memory card and unprepared for the beauty I was about to see. It was there Antoine, his father, his assistant, and Hélène, his friend and another artist and one of the most generous persons I met, and that today I can call my friend too. Before everything starts at the studio Antoine showed me a stone and explained how important is for him to work from raw materials from the region. Every detail in Pierini studio exhales history and identity, since the original cut stones from the 15th century until the rock in front of me as if even the glass had some form of terroir. After that first explanation about his process, he invited me to have lunch with family and friends there, just before the work on the studio starts. I had an unforgettable homemade lunch made by Antoine’s mum in space in the back of the studio. There was a lovely table under an olive tree were the whole family seemed to gather, they live there after all. I felt so welcomed there that I was already very grateful to be there, but the next thing I was about to testify more that made me happy, it changed me.

The glass making itself I think is better understood with the images I produced, probably because I’m better with images then I am with words. No surprise I’m a photographer. Still, I feel the need to reinforce what I felt that afternoon, to create things is an intense process when made with passion and intention. And it was as if there was a line of knowledge and wisdom going back and forth in the studio between Antoine’s father, Antoine, and his assistant. The growing piece of glass was everything there, the time stopped with full attention to what was emerging. Due to the high temperatures, glassmaking can be quite dangerous. I testify not only a great deal of physical endurance because the glass also was heavy and they were dealing with fire, but also mental strength.

And then, after several hours doing this huge piece of art, just in the last step, I photographed the piece just before it splashed on the floor. I was shocked by it, not only the loud sound but seeing all this effort shattered it was for me like the broken of a spell. I was seeing before my eyes this artisan pursuing excellence in his through too much effort and then it was gone. Antoine left the studio for a short time, obviously frustrated. But then he got back so well and calm, it puzzled me so much I had to ask about his feelings. He told me those things happens, you have to get used to it. Sure, but to see a person with so much wisdom about his craft, with so much emotional strength it made me think a lot about my process and how people usually deal with this kind of situation. This anti-climax end made me admire Antoine even more because I was seeing in him and his work something really special about craftsmanship: not only the craftsman change the world with his effort and skill and he itself is changed by the process. A craftsman who is chasing excellence knows that excellence is something you build over time, that while you are creating something you are becoming something too, we are what we repeatedly do. He wasn’t reduced by one shattered piece, on the contrary, I saw greatness in his understanding of his craft. His excellence wasn’t defined by a single episode, but by his process, his habits.