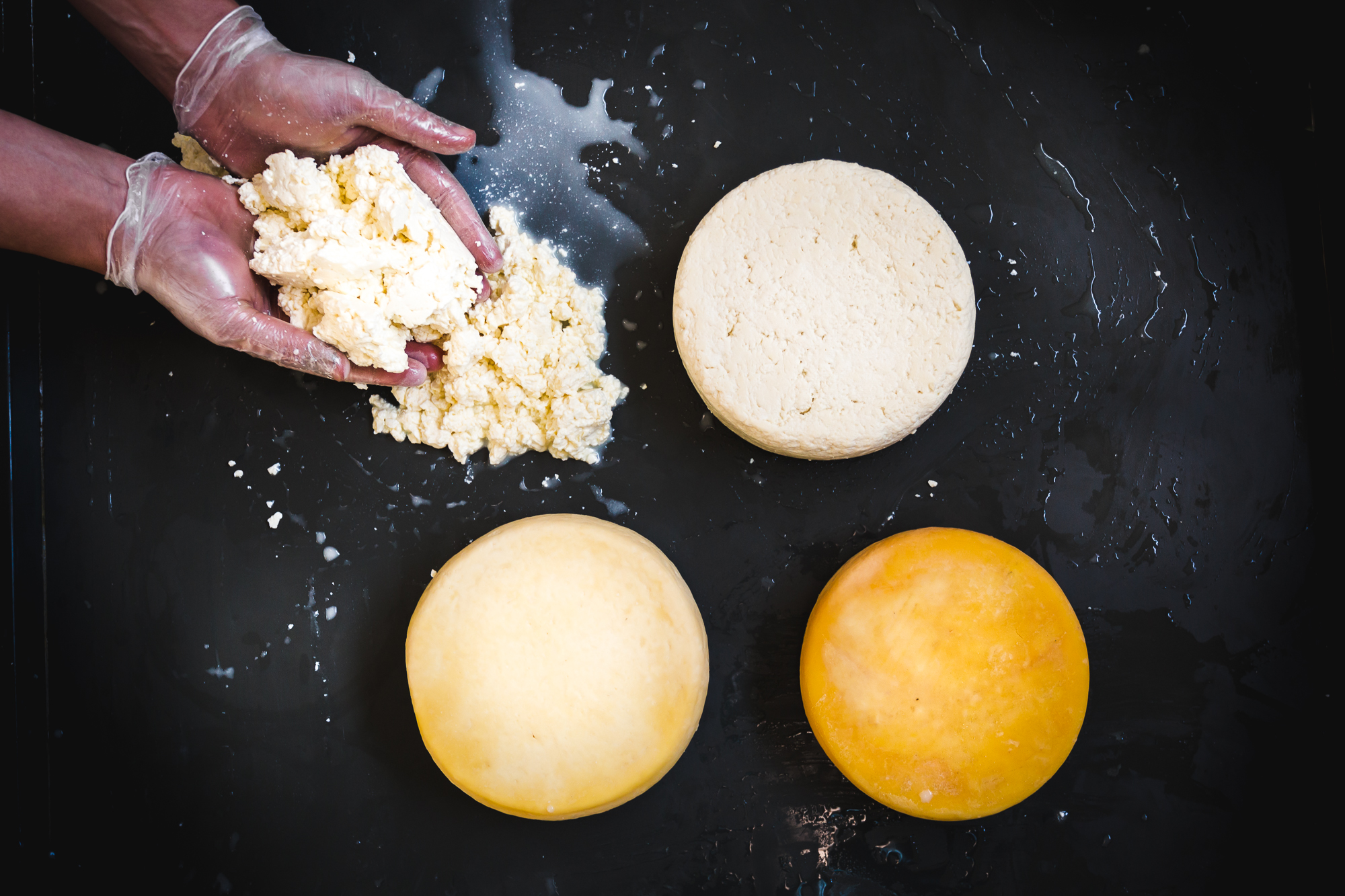 Minas Gerais is a state in Brazil with almost the same size as France, and we could say with almost the same passion for dairy products. Products like cheese and doce de leite (a form of caramelized milk) are present in the emotional core of that state, and each smaller region of Minas Gerais has its typical cheese recipe variant, with its particular flavor. It is not an understatement to say that cheese making is part of the identity of Minas Gerais, and a field with cows on it is a common landscape of the region. With all that being said, it is easier to understand why the experience of photographing cheese making was important for me, as I conceived Artitus Project.

In the middle of 2016, I was invited by Guilherme Vieira to photograph the cheese-making process of a particular cheese called Catauá, on a beautiful farm in the Mantiqueira mountain, Minas Gerais. Guilherme is the owner of Roça Capital, a store that sells cheeses, sweets, and other delicacies from different places in Minas Gerais. He plays a very important role in the path that various artisanal products travel until they reach the consumer table. On our way to the farm, he told me about the work of discovering small producers and bringing their products to the store in the capital. We were talking about it during several hours, driving by car in difficult dirt roads, not always well maintained, just to discover the next flavor. Some could question why I think his work is that important, since he is just bringing something that other people did already. The thing is that Guilherme, as others do in different fields, is bringing to a broader public products that are just not interesting for the big companies due to its small batches, and by doing this he is strengthening the local economy of those producers. Sometimes we are talking about pretty small villages, who receive a great economic impact.

When we arrived at the farm, its owner Mariana Resende received us in a very friendly and welcome way, and as it is traditional in Minas, with some pretty good food. After the customary coffee after lunch, we started working taking pictures of the chubby cows to show how well treated they are. Mariana showed us how important was the cleaning of everything, especially during the milk extraction, because their cheese is made with raw milk. Catauá is an artisanal ripened cheese, famous for is bubbles, called “lace” like the fabric. All of their cows are born on the farm, and they are grass-fed on the farm pastures. They produce 30 to 35 pieces of cheese daily. The milking is done mechanically in a closed system to ensure a high level of hygiene. However, the mechanical part ends there; after that, the milk can be transformed manually into cheese. There is not yet legislation stating what it means to make an artisanal cheese, but if you see the process of Catauá cheese-making, it is easily understand that this is a handmade cheese, where every piece is crafted by hand through the process. At the time, they had an employee who worked on the cheese making, and I remember a remarkable observation from him. According to him, the milk was pink; I was puzzled that I could not see the pinkness of the milk. And this struck me as a sign that some sensibilities can only be formed by close attention on an everyday basis, a distinct character of the artisanal process.

Another important lesson from that day was the role of the seasons on the flavor of the cheese. When it comes to artisanal product, one cannot expect to taste the same flavor twice, as it all depends on the grass, on the cow and on how the season behaved: if it had rained enough, if the weather was too dry and on. And sometimes, even with the same cow and the same recipe, you have a completely different cheese in front of you. One big reason for that is a common ingredient of every artisanal process: time. You need time also to mature the cheese; only after that, you can have a more complex taste. In Catauá cheese time´s effect is not subtle; you can see its consequences on the photo, featuring different stages of the maturing process. After a while, the cheese became smaller, fattier, richer, and luscious. The cheese receives an inspection one by one before being packaged and sent kilometers away, like in the Roça Capital case. Every step in the production is important, starting with the calves being born and growing on the farm; and since all the cheese is made with cows born there, the production growth is very slow, as expected. The need for artisanal products is increasing, but the logic of an artisanal process does not obey industrial rules; it cannot increase production at an industrial pace at all. Artisans like Mariana are guided by their process, not restricted by it; it is just how things are done in the artisanal cheese-making.

To work with an artisanal process is a lifestyle choice, and is easy to see why at Catauá cheese-making, there is a time for everything, is not a job that you have time to start and finish. There isn’t a proper starting point on the cheese-making process because everything is connected, even during the night when the cows roam the pasture. The way the Catauá cheese came to exist is only a part far ahead in a story that materializes the junction of a raw product from that place, milk, and combines it with the human effort to create a completely different thing. And this cheese is the combined effort between history and human creativity, it is the reminder that one day someone tried to dominate the nature that rotted milk to better ensure the sustenance of himself and his family. In a way, all cheese is the expression of what we have most human, the ability to transform our environment, to be a being who creates processes and things, to be an artisan.